The year is 2021. An unexpected and highly parasitic virus has devastated human society. The virus, known only as “Gastrea”, has driven humans into massive walled cities. The only thing that is capable of withholding the virus infected monsters is a metal called Varanium. The city walls and the weapons mankind uses to fight against these monsters are made of it. Despite efforts to keep "Gastrea" at bay, children were soon born with the virus already inside of them. Children born with the virus were called "Cursed Children", were only female and had special powers which humanity deemed as their best weapon to fight against Gastrea monsters.

Every team sent out to help fight the virus is composed of Initiators, who are Cursed Children, and a Promoter, who is there to guide and protect them. Black Bullet focuses on Rentaro Satomi, a second year high school student and Promoter along with Initiator Enju Aihara, who is like a sister to him. Together they carry out missions for Tendo Civil Security until one day they receive a secret mission to prevent the destruction of Tokyo area from Gastrea invasion. 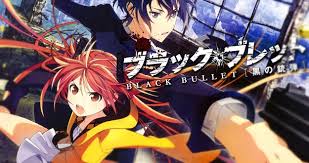 Here is what they have to say about the show...

In the year 2021, mankind was defeated by Gastrea, a parasitical virus, and is forced to live within a wall made of Varanium Monoliths, a metal that is able to subdue Gastrea. Soon, the "Cursed Children", children born with the Gastrea virus who are able to control it—which gives them superhuman abilities—were discovered. Due to the Gastrea virus' intervention, the Cursed Children could only be female. Civil Securities are formed to specialize in fighting against Gastrea, operating with the pair of an Initiator, who are cursed children, and a Promoter, serving to lead the cursed children.

Yup... If you guessed that the two in the picture are our main characters you would be right!
This Anime wasn't a bad one at all... I don't usually like any kind of show with discrimination on race, gender, religion and so on and I have to admit I still didn't like that aspect in this one... But it was necessary to the story line from the episodes I have seen so far.

That was a surprise too... I usually see things where it is added to make the whole thing seem dramatic... But in this case it is a key point of the Anime!

I hope their situation gets better as the Anime progresses!

So far... In the first 5 episodes they have dealt with the Gastrea, Loss of comrades, Discrimination, and even the law enforcers breaking the law because of hate. It's a tough life for them! Oh and lets not forget the resident "has been" turned "Psycho" that turns things upside down! 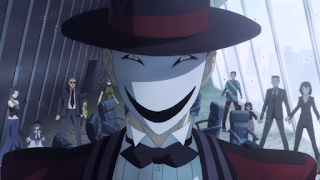 Ya that's him... And that is a shot from the second time he disrupts things!

But to find out exactly how these things happened or how our characters deal with the problems you have to watch the Anime and find out!

Now it's time to rate it

On a scale of 1 to 10 with ten being a "perfect-must-Watch" rating I give this...
.
.
.
7
.
.
.
I gave it a seven because I can't completely forgive the fact that the discrimination of the only people who can save everyone even takes place... I mean... Come on! They are the hero's from what I can tell so far! Treat them better for pete sake!!!

I can't wait to see how this turns out... Hope I've peaked your interest too!

As always... Thanx for reading my review!
Have a pleasant day!
Posted by Mistique Robin at 10:00 AM