Tokyo has become a cruel and merciless city—a place where vicious creatures called “ghouls” exist alongside humans. The citizens of this once great metropolis live in constant fear of these bloodthirsty savages and their thirst for human flesh. However, the greatest threat these ghouls pose is their dangerous ability to masquerade as humans and blend in with society.

Based on the best-selling supernatural horror manga by Sui Ishida, Tokyo Ghoul follows Ken Kaneki, a shy, bookish college student, who is instantly drawn to Rize Kamishiro, an avid reader like himself. However, Rize is not exactly who she seems, and this unfortunate meeting pushes Kaneki into the dark depths of the ghouls' inhuman world. In a twist of fate, Kaneki is saved by the enigmatic waitress Touka Kirishima, and thus begins his new, secret life as a half-ghoul/half-human who must find a way to integrate into both societies.

The Anime can be watched on FUNimation and HULU... But you have to pay for HULU and as far as I know it is part of the free line-up on FUNimation. 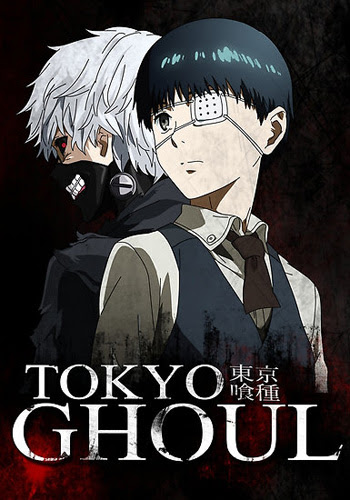 I'm not going to go into detail on what they say... I'll just sum it up!

Lets just say that I cried a few times and wanted to put my fist through the TV just as often! It is a fast paced - action packed anime with a side of romance... Yup... There is Love in the air! Oh and lets not forget the heart wrenching deaths... I keep seeing the poor little girl when she realized her moms dead body is aiding in her death!

Now that I peeked your interest... It's time to rate it!

Let us all hope there is a season three!!!!!
.
.
.
.
I'm gonna stop here because otherwise I am gonna cry all over again!

As always... Thanx for reading my review!
Have an adventure filled day!
Posted by Mistique Robin at 10:00 AM