.
Manga
.
Synopsis
.
.
Normally here is where I would put out the MyAnimeList.com synopsis but this particular manga is so new there isn't one! The closest I could get was to link the name above to MangaFox's description page... Which really isn't much either.

It's really crazy because I didn't think there would be a manga or anime I looked up not able to be found on their site! So... First thing I can do is list where you can find it!
So here it is... The manga this week can be found on two sites... 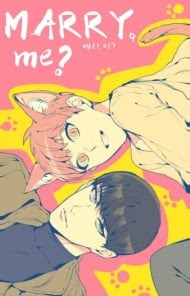 MangaPark: Marry Me?
MangaFox: Marry me?

I have to start off now by saying this is a really new manga... Not just new to be translated either... I mean it was only published this year... That means in 2016... I think this is a first for me too... I usually find out about anime and manga well after it has been out or talked about for years... This is the first time I'm finding out as it is being written!!!

So on to talking about it!

First of all it is a Yaoi... I'm sure you can guess that from the picture... But as of chapter 5 the two in the picture are not the two dating! The animal person is actually named Marry... And he is a manager at a marriage firm that pairs up animal-type beings with people looking to get married.

The other young man is his customer that he is trying to set up with a partner.... There are a lot of mishaps as he goes... They literally had me laughing in tears sometimes!

The bat-type was the best shocker though!

Now you are probably wondering why I am calling them Beings and not people right? That's because they are from outer space... Yup it totally reminded me of Cat Planet Cuties! I'm not kiddin!!!


OK... Now that I've told you a little about it I think it's time to rate it

On a scale of 1 to 10 with ten being a "Perfect-Must-Read" rating I give this...
.
.
.
10
.
.
.
Yup that's right... It's that elusive 10!!! This manga may not be done yet but I feel like it has the makings of something super amazing! I mean come on... There is romance... Comedy... Yaoi... and a cute back story given early on so you understand where the customer is coming from! I am seriously going to be watching to see where they take this one... Does the manager end up falling for his customer... Does he set up the customer with another customer and end up miserable? Is it really only for the money he can get from this guy? I wanna know it all!

I really hope what I've shared with you has you wondering even if it's just a little bit!

As always... Thanx for reading what I share!
Have a romantic day!
Posted by Mistique Robin at 10:00 AM