.
Waiting in the summer
.

While testing out his camera on a bridge one summer night, Kaito Kirishima sees a blue light streaking across the sky, only to be blown off the railing seconds later. Just before succumbing to unconsciousness, a hand reaches down to grab a hold of his own. Dazed and confused, Kaito wakes up the next morning wondering how he ended up back in his own room with no apparent injuries or any recollection of the night before. As he proceeds with his normal school life, Kaito and his friends discuss what to do with his camera, finally deciding to make a film with it over their upcoming summer break. Noticing that Kaito has an interest in the new upperclassmen Ichika Takatsuki, his friend Tetsurou Ishigaki decides to invite her, as well as her friend Remon Yamano, to join them in their movie project.

In what becomes one of the most entertaining and exciting summers of their lives, Kaito and his friends find that their time spent together is not just about creating a film, but something much more meaningful that will force them to confront their true feelings and each other.

To combat the approaching boredom, friends decide to make a film together documenting their memories together.

OK Crunchyroll.... What wonderful insight! I can see why people pass this one up...But I don't think you should because there is much more than just that snippet... I mean... Just look what MyAnimeList had to say! So much with just the right amount of reveal or hints.

So with that amazing lack of explanation... Let me try to let you in on a bit of what you can expect from this one... Hopefully I do a better job. Here we go... 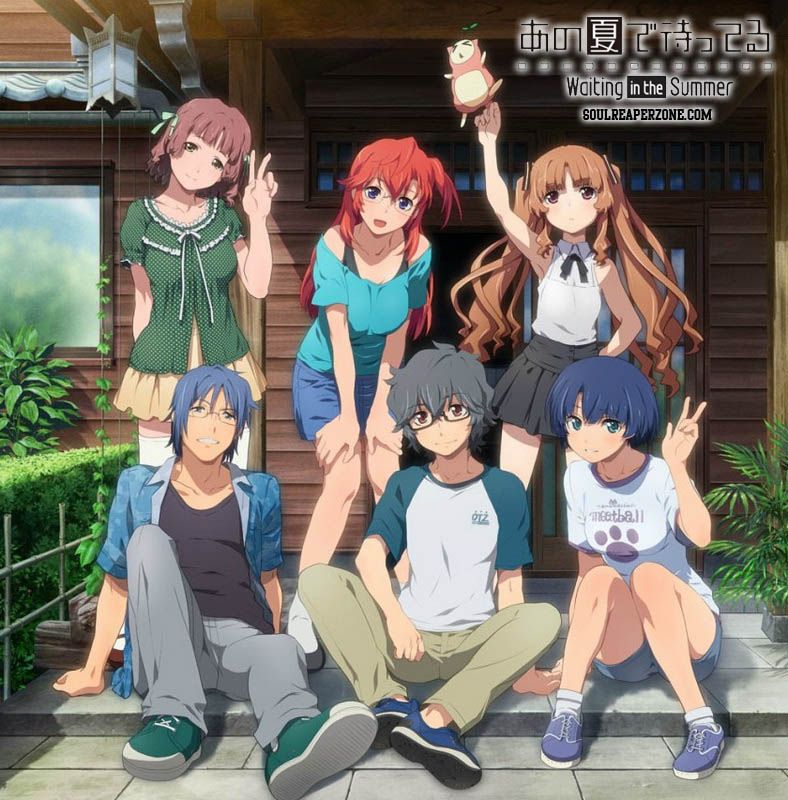 There is a plot twist or two that happen in this one that I don't think you see in average Slice of life style anime.... It's got aliens.... I'm not telling you who... but one of the girls in the picture just above these paragraphs is an alien!

There is also a twist toward the end... Yes... I watched it all the way through before I wrote this. It is a great anime after all. I couldn't help but laugh when they pulled out that last little twist... And the fact that they wrapped it all up nicely was really good too. It isn't often that you find an anime that does that!

You could also say there was lots of love in this little anime... There was a circle of who loves who showed in one of the episodes... I was surprised as each crush revealed itself. There were some that were expected and some that were not... and one girl has a secret that she feels ashamed about... Not saying who it is though! You will have to watch to find out but I will say it was a secret that I didn't expect! I kind of felt bad for her because of how it was revealed!

Speaking of revealing things...Let me now reveal the rating I gave it!

On a scale of 1 to 10 with 10 being a "Perfect-Must-Watch" rating I give this...
.
.
.
9
.
.
.
I think the reason this anime failed to get that elusive 10 was because there were so many things they could have done with it but it was ended instead. It was actually a bit of a letdown... At first I thought that they were setting it up for a second season but that didn't happen. I'm sure if they wanted to they could figure out a way but they passed up a good option. At the same time they also made sure that if it wasn't popular enough for a second season it wouldn't leave you unhappy with the ending so that's why I couldn't take away more than one point.

I hope this was insightful for you... I didn't really talk about the episodes because the summaries were enough to give you the gist and I didn't want to ruin it before you watch it.

As always... Thanx for reading my review!
Have a galactic day!
Posted by Mistique Robin at 10:00 AM