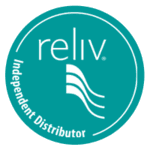 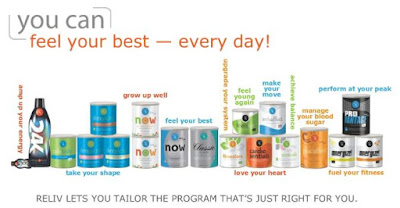 If you are wondering what this post is about... Above there is a list of products that Reliv offers and the RCN you will need when ordering... That is, if you chose too order anything. Below I will talk about a product from the list. I'm going in no particular order though! 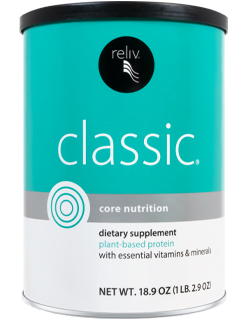 Want proof that your daily supplement works? How about 20 years’ worth? Reliv Classic, Reliv’s original groundbreaking formula, continues to set the industry standard for cutting-edge nutrition.

Just two shakes a day provides a balanced array of soy protein, vitamins, minerals and select herbs to bring out your healthiest you. It’s complex nutrition made simple. Give your body what it needs to excel — and shake up a Classic day!

Proven Effective: A daily regimen of Reliv Classic and Innergize!® may help reduce fatigue in cancer patients. View the study below.

Feature: An optimal blend of vitamins, minerals, amino acids and herbs that contains no saturated fats, trans fats or artificial preservatives
Benefit: You receive the most effective possible nutrient levels for better health and a better quality of life.

Feature: Synergism
Benefit: Nutrients work together in an ideal blend that allows each to provide its full range of benefits.

Feature: 7 grams of non-GMO soy protein in each serving
Benefit: You get the heart-healthy benefits of soy delivered the way nature intended.

Study: Radiation Fatigue and the Use of A Nutritional Supplement

Radiation induced fatigue is a specific syndrome. It is much more defined than “cancer related fatigue.” It is usually not multifactorial, and typically arises within 1-5 weeks after the beginning of radiation treatments. There is usually resolution in the 3-4 weeks post treatment. Radiation fatigue is less intense than chemotherapy caused fatigue.

The nutritional supplement trial with Reliv was based on a number of anecdotal stories of remarkable reversals in various symptoms, and in disease processes such as arthritis, diabetes, fibromyalgia, etc. These responses included reduced pain, increased energy, and feelings of wellbeing. This trial had some degree of simplicity. The fatigue symptom was limited in etiological causes, since the criteria for trial entry was fatigue presenting after the start of radiation treatment. The response was to measure the change in a short period of 1-4 weeks on the product. Patients were at different stages in their radiation treatment. Many would be finishing, and in the 2-4 weeks after completion fatigue normally improves on its own.

It was appreciated that this was essentially a “feasibility study,” and its scientific accuracy would need to be documented in a controlled trial. Yet, if any responses were seen, then this would validate doing a next phase. The placebo effect itself was recognized as a limitation. Also, a major issue was compliance in taking the powder twice a day, and thereby giving credibility to any non-responders. This was not adequately measured, so that in the 9 patients who had no response, lack of compliance was possible. However, the majority were seemingly honest in their reporting.

The product used was Reliv Classic and for half of the study, Innergize was added to the Classic Reliv. Availability of the product determined whether Innergize was added. The dose was 1 scoop twice a day in liquid (it should be noted that a minimum of 2 scoops twice a day is a more standard recommendation). The lower dose was decided upon to help compliance. There was enough product available for a 4 weeks trial for each patient.

The assessment tool was “The Fatigue Severity Scale.” It may not be totally appropriate for radiation caused fatigue, but it was at least a rough validation of response. Absolute scores were less important than relative change of the score over time. Compliance of returning the questionnaire was very varied, but all had at least 2 responses. The attempt was for 1 response a week. Further, patients were interviewed as to how they perceived their responses to be. For this study, credibility was given to the patient subjective reporting.

Patient selection was their declaration of significant fatigue, starting after the onset of radiation treatment. There was no restriction on when the fatigue began and when they started on the Reliv.

It should be noted that there were no other variables introduced to the patients. The fatigue began, and rather than giving any further interventions, the Reliv was started. Further, the acute results are what are being reported. Still, as noted in the individual reports, there were some patients with longer lasting effects, with these patients willing to continue the supplement on their own.

Excellent response was a combination of significant change in the “Fatigue Severity Scale” and their self reporting of a major improvement. A good response was from a +8 to +15 change and also the self report of good improvement. No response could be their stopping the product (one because of vomiting), compliance problems, and most frequently the report of no response and no score improvement.

Radiation induced fatigue is a well defined symptom linked to radiation therapy. There has not been an adequate treatment approach, with little having a significant effect. Physical exercise is considered very important, but patients are often too tired to have a consistent regimen. Mind-body therapies can be helpful, but most patients do not pursue these (acupuncture, meditation, message therapies, etc). And there are the issues of a more pronounced “cancer related fatigue,” complex in etiology and suggested intervention techniques. Further, many of these patients are on concurrent chemotherapy, are anemic, and report other cancer treatment related side effects.

Nutritional recommendations are controversial and very complicated. A general statement of taking vitamin supplements, or extra specific minerals, or various therapies such as juicing, is often made. Patients are typically left to their own pursuits or discoveries, yet most health care professionals would encourage nutritional approaches to help the fatigue problem. Using a product such as Reliv, with a 22 year history, was a relatively simplistic attempt to study whether a response was possible.

This study was a “feasibility study” in the sense that all we were looking for was some effect. The number of variables to do a proper scientific analysis is large, and would represent the next phase of research. The possibility of the placebo effect requires a randomized trial, and was inappropriate to this feasibility study. However, this is recognized in reporting, as well as compliance difficulties, and subjectivity of the questionnaires. All that said, there were the very definite improvements, and in some situations, dramatic changes.

Reliv contains a variety of vitamins, minerals and herbs in a powder base excellent for absorption. It is an easy product to prescribe, with dosing fairly standard. Further, there has been much experience with some studies and many testimonials for a positive result with Reliv. We personally were encouraged by these reports of significant improvement with a range of symptoms from other diseases. Testing a nutritional supplement for relief from fatigue was the motivation for this study. Further, few nutritional products have been formally recommended by the scientific experts in oncology.

The result was a certainly positive response. Approximately 75% of the patients with radiation fatigue had relatively immediate results, many within 2 weeks of starting the product. Roughly 25% of the cohort reported excellent results in reversal of radiation fatigue, and improvement or relief from other symptoms. There was no harm done to those who reported no response (except one with a few episodes of vomiting). The results warrant a more extensive trial with all the scientific rigors applied.

Reliv is distributed through a multilevel sales channel. Some clinicians and administrators have high resistance and negative preconceptions of products distributed via multilevel marketing. It is crucial to point out that all product in this study was provided free of charge and no attempt was made to enlist patients in further purchase or marketing the product. A few members of the cohort did buy additional product after the initial response but none were asked to participate in distribution.

Cancer related symptoms often are the most significant issue in quality of life. Treatments such as radiation can be highly symptom producing, with fatigue perhaps the most generic problem. Having the possibility to reverse this problem during the course of radiation is a significant benefit helping both the patient, their family, and the healthcare professionals managing their treatments.

A feasibility study on 37 patients undergoing or just having completed radiation and having significant radiation fatigue was conducted. The patients were placed on a nutritional supplement program named Reliv, and measured for response over 2-4 week continuous treatment. Results show that 75% of participants considered their result as helping their fatigue, and 25% of the entire group reported an “excellent” response. The feasibility study’s result warrants a second phase clinical study conducted under rigorous scientific methodology, and should be considered for the syndrome of “cancer related fatigue.”

These statements have not been evaluated by the Food and Drug Administration. This product is not intended to diagnose, treat, cure or prevent any disease.
Posted by Mistique Robin at 10:00 AM