On the first day of junior high school, Mato Kuroi happens to run into Yomi Takanashi, a shy, withdrawn girl whom she immediately takes an interest in. Mato tries her best to make conversation with Yomi, wanting to befriend her. At first, she is avoided, but the ice breaks when Yomi happens to notice a decorative blue bird attached to Mato's phone, which is from the book "Li'l Birds At Play." Discovering they have a common interest, the two form a strong friendship.

In an alternate universe, the young girls exist as parallel beings, Mato as Black★Rock Shooter, and Yomi as Dead Master. Somehow, what happens in one world seems to have an effect on the other, and unaware of this fact, the girls unknowingly become entangled by the threads of fate. 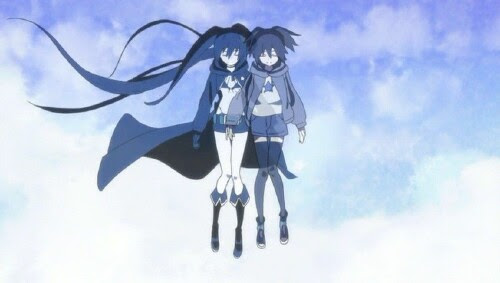 The Anime can be watched on KissAnime and AnimeSeason...

So now that you know where to find it let me start by saying.... You are gonna need to watch this one twice if you aren't good at keeping track of two seemingly different anime at once.... Yup... I said it.

And the thing is... I meant it. You see the two girls in the image above.... I bet you are thinking wow they are twins right.... Wrong. They are the same person... Just from two parallel universes. It really plays out the theory that you have an infinite amount of lives being lived out all at once in the same time but different space. They added a twist to it though... Well two actually... The first is that there is only two lives.... The second is that what you do will affect the other you... It really can get confusing too...

In episode 5 some details finally get explained instead of you just guessing at things... Yeah that's where I learned about the part where you affect the other you... To be fair... I never would have figured that out without help. But... I do know something I can figure out!

.
.
.
9
.
.
Yeah I gave it a high mark... And even though it gets confusing and I'm not sure what the point is to it all I still think it's an amazing anime. The concept is well thought out... The art is beautiful... Fight scenes are gorgeous and well planned... I'm sure the last three episodes will explain so much too. Although... Even if they don't I still say it deserves the 9.

There are not a lot of anime that I have come across that confuse me and at the same time make me start thinking about all this crazy sci-fi type stuff! This is one of those that manages it... And to top it off it never loses my attention!

I really want to tip my hat to the creator because wow... Although I saw a picture that made me wonder something else... What is up with the blue flame eye thing... I mean... why blue... right away I came up with Rin from Blue Exorcist... So if I think that way... is she the devils daughter? Is this what happens to the girls??? Just something for you to think about.

Gonna end this review here... Hope you enjoyed it!

As always... Thanx for reading my review!!!
Hope you have a supernatural day!
Posted by Mistique Robin at 10:00 AM