Ellen moves to a new house in the country side. There she meets a spunky green-haired elf and learns an alarming truth. She’s a half fairy! Plus three side stories.

From Wingtip Cafe: Ellen moves to a new house in the country side. There she meets a spunky green-haired elf and learns an alarming truth. She’s a half fairy! plus 3 side stories! • The Children of Planet A - Paula's father is a novelist. One day, she comes across a story that he had written long ago and took the words from the story into her life. Plus two other stories 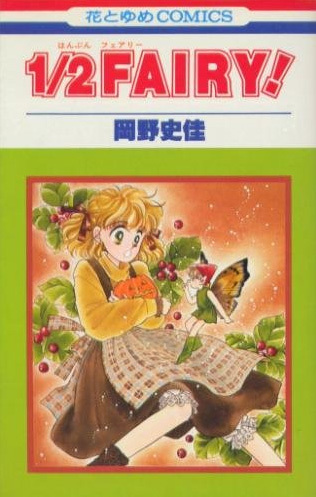 
When I read the title to this manga I really thought it had a lot of potential.. I love fairies and I love stories that are out of the normal everyday setting. I had very high hopes for this one so I started out with a great mood.... I wish I could say it lasted.... The story isn't bad and the art isn't drawn terribly so that was a plus but I had issues with this one.

There are going to be times when an anime or manga just doesn't sit well with you no matter how good it really is... I think this was one of those times for me. I read the manga and then I took a few days to let it sit with me so I could give an honest and truthful review since I was unsure about it when I first finished it.

So let's start with the facts... There are only 3 chapters posted on MangaPark and as far as I could tell that was all there was to the story. This alone makes me not really interested because in my opinion there can't really be any significant character growth with so few chapters. I'm always left feeling like I just started to get to know the characters and then the story is over when it's this short of a story... I never like that!

And true to my feelings I was disappointed... I found that the first two chapters are related to the original story and the last chapter is really the side stories. I don't feel like I got to know the characters at all!!!

But I did get to know the story enough to rate it...

On a scale of 1 to 10 with ten being a "Perfect-Must-Read" rating I give this...
.
.
.
4
.
.
.
Yes it is a low score I know but I promise I had reasons! First... Although the art wasn't bad it wasn't a style I really enjoy looking at... It reminds me more of a comic I could get here in america and what I love about Manga is that it is so different from what I could get here.

Second was the biggest contributor to the low score... I didn't really feel the story flow was good... Now let me explain a bit. There were times the story felt like it was crawling and times it felt like it was rushed... Almost like the mangaka realized there were only going to be two chapters and at times they felt they needed to try to cram as much into those chapters as possible but then realized it was getting confusing so they slowed down to try to explain stuff a bit... It had that kind of a feeling. When there aren't that many chapters it is hard to get a whole story out and I think they did amazing because they managed to do that but it wasn't in a way I liked.

The last reason was that it was just too short! It was nice that there were side stories but those side stories seemed to have nothing to do with the original story and it made it seem odd to me... The fact that there wasn't enough left me with questions and no answers... I really didn't like that.

Even through all this I think it was a good manga... Just not one for me! Check it out an see if maybe it might be something you'd like!

Well that's all for now!

As always... Thanx for reading my review!
Hope you have a romantic and fun filled day!
Posted by Mistique Robin at 10:00 AM