So time is FLYING by... soon I will be 29 and shortly after that I will have another lil one to terrorize me lol. At the same time I am looking forward to all the changes that are happening I am made sad by them. It will be nice to know if I have a boy or girl growing in this ever widening beach ball belly lol, but at the same time I am nervous about how well I will handle two who are in diapers! I was hoping that Liethana would be talkin a lil better... and now that I think about it... she might be by the time the baby is born. I'm 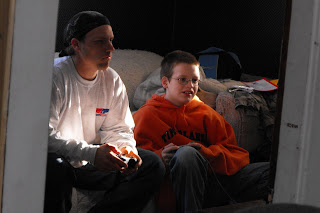 not looking forward to the sleepless nights again lol... or should I say the waking up at all hours! But again the good thing is that even though I will be waking up at all hours, I get to cuddle my lil ones! It almost seems that for everything that I am nervous about there is something good to look at too! I am trying to focus mostly on the good things. I have to think about the other things too or I will feel overwhelmed and that is not where I wanna be either.

Shawn is coming along as a dad... He still has a LONG way to go before he can claim he "knows what he is doing" lol. There are a lot of times he tells me "you have done this before... what do I do?" and all I can say is what I did if it happened with Anthony and when it is something new I can only say what I think we should do... It's not much help when he is panicking or something lol. He and Anthony are starting to get a real friendship type relationship going 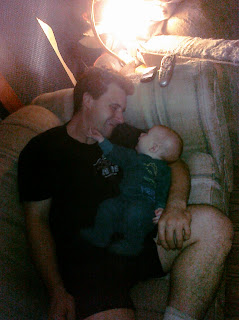 ... But then Shawn acts like the step dad and it goes out the window lol. Anthony likes spending time with him but he doesn't like when he disciplines him. I tell Anthony he has to get used to it cause Shawn isn't going anywhere! The pic of them playing playstation is about 2 years old... Anthony is bigger as you can see in other posts and Shawn has short hair now. As you can see in the pic of Shawn and Liethana, he is very much enjoying being a dad! I swore she was posing with him for this one... both with HUGE smiles on and the hand on his chin is priceless!


I want Anthony to feel that love too... Shawn loves him but since he has spent so much time making sure Anthony new he was not replacing his dad things are harder between them. Shawn is unsure how to show Anthony he loves him as much as he loves his daughter and Anthony doesn't know if Shawn wants to be his step dad or not. Shawn is gonna work on it... I'm sure Anthony will notice. I just want for Anthony to know that the new lil babies don't replace him in any way, and that there is plenty of love to go around! I know it isn't easy on him to see her get so much love and he gets love but doesn't see it as the same. To be honest it isn't the same. He gets discipline as well as love where she is just starting to get the discipline due to how lil she is. I'm sure as she gets older he will see she is getting the same as him when she does wrong and when they do right then they both get praise. But that is another story. For now things are continuing to change and grow and we shall see where the winds carry us. One thing is for sure... It is going to be an interesting ride and a trip that will take a lifetime!!! 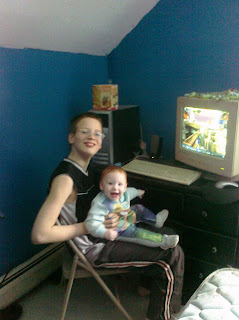