too long since I last wrote! 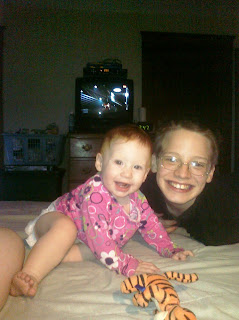 It has been a LONG while since I wrote... and to be honest... as I was thinking about this blog I had the whole thing planned out on how I would say things and what I wanted to write. Now however, when I actually have the time to write all those lovely things I had planned, I find I'm at a loss for words. Soooo much has happened and I didn't write it all down! I guess the best place to start then is to talk about everything from the past few months as I remember them so I'm sorry they are probably going to be out of order. Anthony is handling being a big brother with flying colors! We do hit points where he gets really frustrated with her though lol but other than that they are sooo cute together! In this picture Liethana crawled over to him when I was intending to get a picture of just him. He started laughing and said she was a camera hog lol. They are both such hams each wanting there own camera time lol. Another good thing is that she made him laugh so I was able to get a REAL smile... sometimes I think he HATES to smile in his pictures! All and all he is doing so good ajusting... I'm so proud of him. I know it hasn't been easy for him going from being an only child for 11 years and then bam... here she is! Add to that the fact that now there is another lil one on the way and he is being amazing about it all. I think he is hoping the new baby will be a boy... to be honest so are Shawn and I lol. One lil me is enough! Anthony is a lot more like his father than I care for but he is who he is and I love him for that. I think he is acting like he saw his dad act because he misses him and sometimes resents me and shawn being together. He once told me I should still be with his father and I had to explain that some people get along better when they are not together. His father and I are those type of people... I know that hurt. There are so many things I wish he didn't have to go through and I wish I wasn't a source of sadness in any way. The truth is he has done well ajusting to Shawn as a stepfather. He sometimes wants him to be a bigger part of his life and sometimes he wants him to take a back seat since he isn't his birth father. 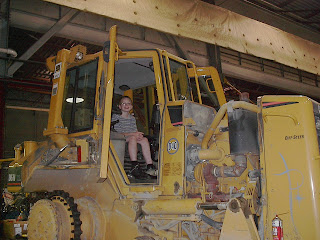 Shawn took Anthony to work in this picture and sat him in a "dozer" he was fixing... It was after work hours but the boss said it was ok and Anthony was in heaven! He looks soooo TINY in there lol! That was before I was pregnant. I think it was 2 years ago for Christmas that I let Shawn buy a bea-bea gun (no idea how to spell that lol) for Anthony and him to share. It was something they could do together that Anthony wouldn't feel he was being treated like a baby. Now I'm extreamly glad I did that. It gives them something fun they can do together and lets Anthony feel special for a lil while. It also gives them something to bond over. Shawn wants to eventually take Anthony hunting... though this would normaly upset me I know that the animal will be going to a Native resurvation so I am not as upset. I don't know if Anthony is going to be able to actually shoot an animal though. But that is a story for another day!

Liethana is growing soooo fast! It seems like yesterday I brought her home from the hospital and had panic attacks over if she was getting everything she needed. Now here it is almost a year later. I can't believe she is going to be a year old on June 24th! Where does the time go??? She is a lil genious I sware! I know... every mother thinks that about there kids. She is already talking a lil... she crawls... she trys to walk with help... there isn't anything she sees 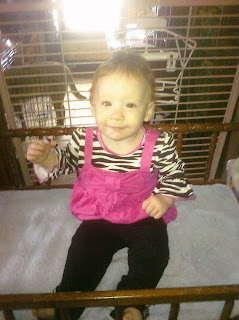 someone do that she doesn't try to do! The one that blows me away is her talking though. She already strings 2 siliblas together sometimes... like when she wants to she will say hello... usually it is just hi but let me tell you when she says hello you know it lol. She randomly says good doggy... ummm that one is a bit advanced in my opinion but she does say it. I'm sure your thinking noooo you just think she says it... and I would agree with you if I was the only one who heard it. The truth is that 2 other people have heard it and were like wow. Some of the other words she says are wow, ow, dada, mama, low low low (she loves repeating that one lol) and sometimes she says la la la like she is singing a song. For 10 months old this is a verrrrry big vocabulary in my opinion. She just amazes me more every day! She has out grown her first carseat too. We had to go get one that can sit both facing front and back... she is still too lil to face front. She has reached 20 lbs... and let me tell you... when you are pregnant and have to walk up a flight of stairs holding a 20 lbs. baby you know what heavy is lol.

All in all my kids are my world and I can't wait to find out what this one is. Ya, I still haven't found out what it is. Soon I hope to know. As far as the pregnancy is going... things are moving along. The baby will be born in June. I have a running joke going in my head... no one else thinks it is funny but I do. My new baby has a due date that is a combination of my other children's birthdays... Anthony was born February 26th and Liethana was born June 24th. This baby is going to be born in Liethana's month on Anthony's day, June 26th. It's a riot to me! We don't have another girls name picked out... but if it's a boy we are naming it Christopher Charles Robin... still not sure about the spelling lol... Shawn wants to use the exact spelling for his grandfather's name as the middle name.

And now my time has run out... Liethana is up from her nap. I'll tell more when I get another chance. Hope you like the pictures! I'll do my best not to be so long between writing again but life is demanding and I never know when I will have a momment to spare!