Kitou Hijiri, a student, confessed his feelings to a Chemistry teacher named Nakatani Ayano whom he had fallen in love with 8 years ago. Somehow when he was young, he lived beside Ayano and bear feelings for her. Ayano, in turn, could not resist Hijiri’s determination and strong feelings towards her. What will be the ending of their taboo love? 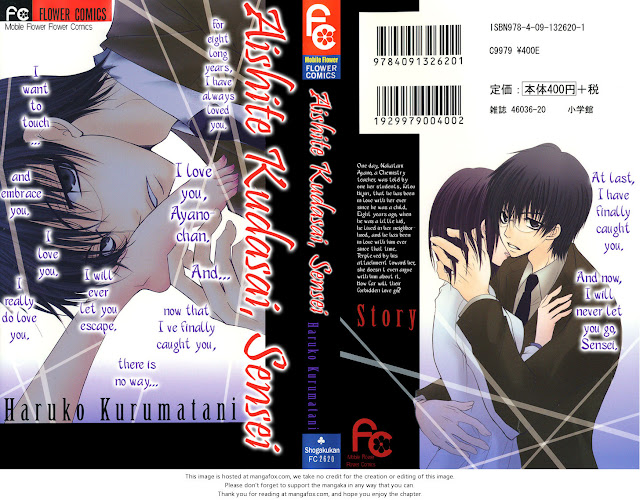 I don't really like this one... I will start of with saying that. This is because I think this boy is too intense... I think he was so obsessed he became psychotic. When she doesn't want him he forces his feelings on her going just shy of raping her to show her he loves her but that isn't love... I could have understood if it was that and then he had every intention of giving up but that wasn't how it was. He had no intention of letting her go!
Now that I have gotten that out of the way... Let me say it is a very short manga... Two chapters short to be exact! For that fact I was very grateful! I can usually handle this kind of manga ok so I don't quite know what it was about it that rubbed me the wrong way but it really didn't sit well with me.
With that being said... Let's find out my rating, shall we?

On a scale of 1 to 10 with ten being a "Perfect-Must-Read" rating I give this...
.
.
.
2
.
.
.
I think this is the lowest I have ever ranked an anime or manga. There just wasn't enough to the story... It was like I could only get how obsessed and possessive he was and nothing else... And by the end I felt I had just learned how to inflict Stockholm syndrome on someone!

Not that I would ever do that but I can't help but think about how it might not be a good thing to have so available to the public... But hay... That's just my opinion. Then again you are reading this for my opinion so yeah. I think I'll end the post here because I can't think of anything other than "it has good artwork" to say that is nice. So yeah... Not my favorite.


As always... Thanx for reading my review!
Hope you have a wonderfully mysterious and revealing day!!!
Posted by Mistique Robin at 10:00 AM