It's been a while since I have written.. things are hectic here. Rosa had an EEG a few weeks ago. My poor baby! They are supposed to stay on for 48 hrs. but since it was a Friday when they put it on her they would not be open again until Monday to take it off. At first I didn't think anything bad about this. It tool them 45 minutes to put all the electrodes, tape, and goop on her then another 10 minutes to wrap her head so it would all stay on. It was an hour of torture! When they were all done we were sent home and she slept most of the way so I guess that was a good thing. During the weekend Rosalina managed to knock all thier hard work off at one point or another. Liethana wanted to pull it all off (so did I lol) and to top it all off I couldn't hold her cause the smell coming from the setup was so bad it was making me have asthma attacks!!! So not only was she confused about why she had this thing on her head she was upset cause I wasn't able to care for her!

So finally its Monday morning and our appointment was at 2:30 that afternoon. We decided we were not waiting cause there were electrons that were already off. So we called up children's hospital and they said it should be fine and to come down to remove it. All I could think was yay! When we were there they were confused on why we were early but took us anyhow. And that was awful too... they had to pull all the tape off and it was pulling up skin! My poor baby girl was screaming and there was nothing I could do about it!

In the end poor Rosalina ended up being afraid to lay back for anything. She couldn't lay back without being scared. Even trying to eat was difficult cause she was so scared she would gulp more air than she would eat food. There have been many upset bellies since the EEG.

Now Rosalina is back to her old self again though she still doesn't want to lay down and sleep... but has gotten over the fear of laying back to eat so her belly is doing much better. We got all the sticky residue from the tape off and she is back to smelling like she is supposed to.

Liethana delt with all this very well. She gave her sister lots of support as only a one year old can... using silent love. Rosalina got more kisses and hugs in that one weekend than she has in the first 3 months of her life! It was quite cute.

Right now we are all settling in to a routine. I try to plan my days anticipating when Rosalina is going to have another wonder week. Liethana is finally done them I believe so it should get better from this point on for her. No more huge changes in how the world is perceived.

Though she has no more huge changes in how things are perceived she has a HUGE change going on for her. My lil angel is now in a toddler bed. unfortunatly this is the second night in it and she managed to fall out of it (with me sitting right there too) and gave herself quite a scare. she is back in it to sleep and i have a blanket and pillows on the floor next to it incase she falls again. we are going to get a rail for it this weekend so she will no longer have to worry. other than that things are going good for her.

Anthony is finnally in his downstairs room. He has been wanting this for so long now and is happy about it though he still wants the rug we promised him... and the new bed. after we get the rail for Liethana I am going to save up to get him the bed. It might be a few months cause I have a car payment to make but it will be soon.

I think this is everything I can write without waking Rosalina who is in the same room as my computer so it is time for bed for me. talk to you all soon.

here are some pics of rosa when she had the EEG on... 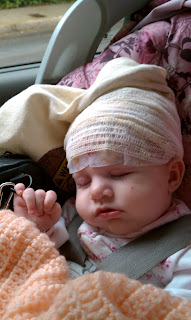 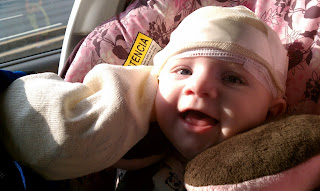 and theses are what her head looked like after they took it off... my poor baby! 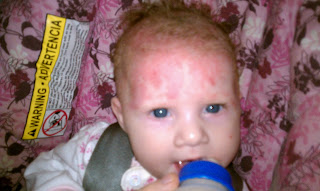 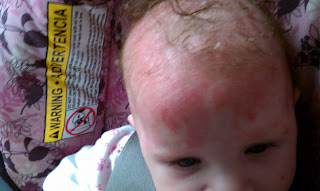 Posted by Mistique Robin at 8:19 AM