One day, a strange transfer student appears before Tsubaki. Urabe Mikoto is an antisocial girl, whose hobby is just sleeping during class-breaks. One day, Tsubaki goes to wake her up and accidentally tastes her drool... And gets hooked on that!

After that, he starts going out with her and gets to know her better. Her second hobby, as it turns out, is carrying around scissors in her panties and cutting paper into flowers...

The manga this week can be found on Crunchyroll... 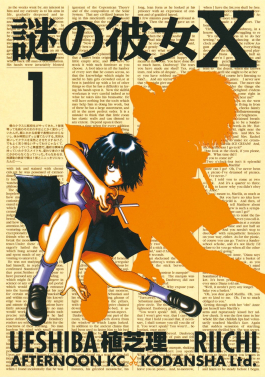 This is one of those manga that made it into becoming an anime.... One where you kinda go "HUH" when reading/watching it. This boy is going to have a world of weird now... He is pretty much addicted to spit being given to him on the girls finger... You know... As apposed to by a kiss. How should I put it... A kiss would do the same but be more enjoyable as well as being normal... But hey... This way is more mysterious right... And who doesn't love a good mystery!

On a scale of 1 to 10 with ten being a "perfect-must-read" rating I give this...
.
.
.
6
.
.
.
The weirdness scale makes this one worth it... Otherwise it would be just another kids romance where no one kisses anyone and nothing ever happens to further the relationship. So lets hear it for weird!

I'm gonna end this review here... Hope my opinion wasn't too vague for ya!

As always... Thanx for reading my review!
Have a wonderfully odd day!
Posted by Mistique Robin at 10:00 AM