When Takeru Amato moved into his new apartment in Akihabara, he was warned that there was one problem with it. He wasn’t warned, however, that the problem was a hole in the floor that leads to the realm of the zodiac gods. He also wasn’t told about Nyaa-tan, the eccentric, immature, prospective zodiac-sign cat.

Nyaa-tan would like nothing more than to join the rest of the girls, otherwise known as Eto-shin, in the Chineze zodiac, but she’s going to have to fight to work her way in. Fortunately, establishing a relationship with Takeru can help her with that. In Etotama the members of the zodiac don’t just represent people’s births; they draw their power from positive human emotions in the form of energy called Sol/Lull. With this power, the Eto-musume, or potential Eto-shin, can change from their mostly humanoid appearances into smaller “pretty modes” that can battle with each other in the Eto world.

Nyaa-tan needs to get Takeru to warm up to him fast, and not just because they’re living together. The ETM12 selection festival to determine the next member of the zodiac is coming soon. With Takeru’s good graces, Nyaa-tan just might be able to fight off the other Eto-musume and the 12 Eto-shin themselves, and finally take her place in the zodiac. 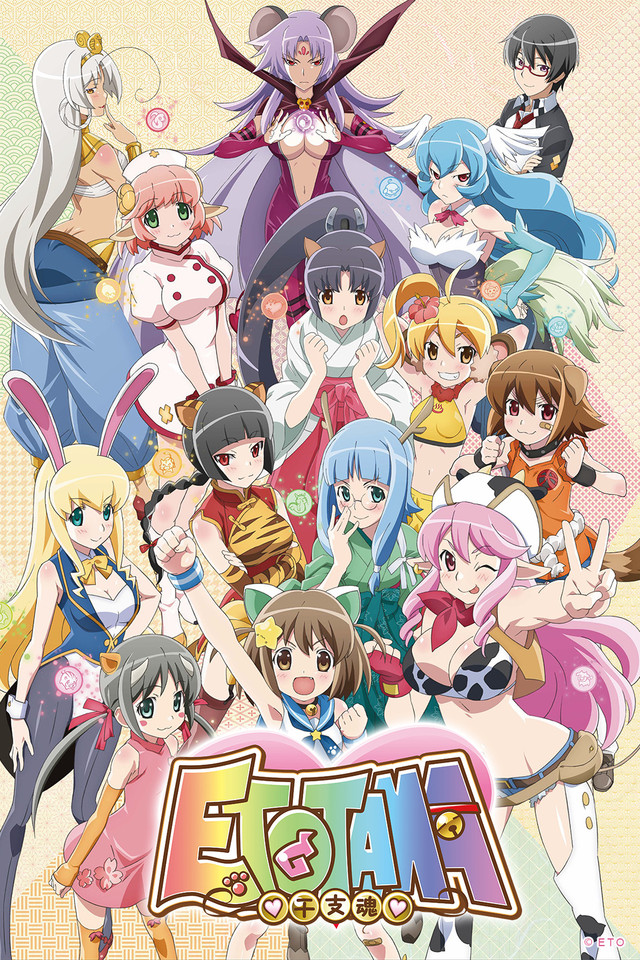 The Anime can be watched on CrunchyRoll...

Since ancient times, Japan has upheld the tradition of the 12 Zodiac signs. Eto-musumes (Zodiac girls), who have the appearance and behavior of the animals of the Zodiac, are pure hearted messengers who act as a bridge between humans and the gods. Every 60 years, the “ETM 12” tournament takes place in Tokyo’s Akihabara district, where aspiring girls from all over Japan gather for the chance to become the next zodiac sign.

So this one is a good one! It reminded me a lot of Fruits Baskets when I first started it... After all it is the zodiac and the cat trying to become a part of it.... However there was a twist even in the first 5 episodes... The cat doesn't even remember why they want to be in the zodiac and the rat has a grudge agents the cat! Yet no one knows what the cat did to anger the rat and the cat has amnesia so she can't explain anything! Talk about a bind! This cute kitty doesn't have a clue! As if that wasn't enough to get you interested... They add in all kinds of fights to gain talisman like things that would actually allow the zodiac to change animals... If I had to describe it then I would say it was like taking Pokemon, Yu-Gi-Oh, and Fruits Baskets and rolling it all into one anime... Ya I would say that fits!

The smaller version of our kitty-girl is her fighting form... Ya that's right... To fight they go Chibi!!!!

Once again... Since I have your attention... It's time to rate it!

On a scale of 1 to 10 with ten being a "perfect-must-Watch" rating I give this...
.
.
.
9
.
.
.
There are just so many things mixed in that I didn't even realize I had watched the first five... It flew by! If you are looking for an anime that you can really lose yourself to that is cute and suggestive all at the same time this one is probably a good pick! I love how it moves both fast and slow at the same time and keeps you trying to figure out the point behind things... There are sad and cute times as well as happy and crazy times! it just seems like it has it all... Once I finish the series then I will know if it should have gotten a 10 instead...

If I change it I'll add it as an update!

Well that is all for now... I am not sharing pictures cause I want you to watch it to find out how cute these zodiac people can be!

As always... Thanx for reading my review!
Have a magical day!
Posted by Mistique Robin at 10:00 AM