The Fujisaki Girls Academy is known for their school body being composed of very proper students. The most prominent one of them is Maki, the student president who is admired by her classmates for her calm and polite demeanor. On the other hand, Kurahashi Riko is also admired but for having a very forward and boyish personality. Riko accidentally walks into Maki while she's practicing kissing with a pillow and learns that she isn't what everyone thinks she is. Riko is forced into keeping Maki's secret and join her in practicing all aspects of romance like holding hands and more.

The manga this week can be found on MangaPark 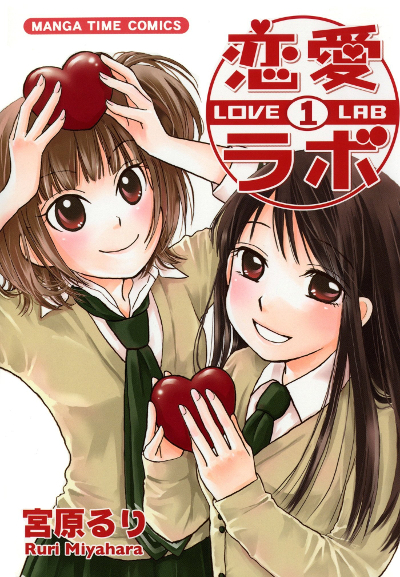 NOTE:
This one is written by Miyahara Ruri and is not to be confused with Love Laboratory (which is sometimes shortened to love lab) that is written by NAKAYAMA Kanmi. They are very different stories to say the least! And now... On to the review!

I read a bit farther than I needed to with this one because each chapter is really short in the beginning... I am unsure if they will change as the story develops but in the beginning I was surprised at how short each was. So the first thing I can say is that it is a good manga for when you have little to no time to spare but need to get a manga fix in!

To be a part of an all-girls school and to be the polar opposite of the person you are "helping" is such a great start to a plot... The fact that you are not as you have made yourself seem is a good twist... And add in that the things you talk about are soooo funny and you get a great story!

That is basically what I have seen happen to Riko in the first set of chapters... The fact that the story has a LOT of volumes says it really did go great! I wonder how the characters develop further along... Are they ever able to get that all illusive boyfriend or are they just stuck in some kind of wishful thinking?

Not to mention... Does the secret that you haven't actually.... Wait... I'll leave that part for you to figure out when you read the story for yourself! So check it out if you want to know what secret lie is told by Riko while she is trying to keep Maki's secret...

Now that I have got you wondering about stuff in the story... Let's get to the good part... Rating time!


On a scale of 1 to 10 with ten being a "perfect-must-read" rating I give this...
.
.
.
8
.
.
.
The chapters are funny and entertaining but too short for me... I think it would be great as a filler manga to read as of right now.. Maybe if the chapters get a bit more to them as I go along I will end up thinking differently but right now that just isn't the case!

I'm not sure how long it will take me to read this one though because if I want to sit down and read a manga I don't want to have to keep changing chapters... I want to be on one chapter for a bit and see a good amount of character development. But then that is just how I like my manga!

I'm going to end the review now since I feel like saying anything else would either give away too much or would spoil something funny...

As always... Thanx for reading what I wrote!
Have a love filled day!
Posted by Mistique Robin at 10:00 AM