One day, Natsuto found a loli near his house and it turns out she's a Holy Loli that is in a mission to eradicate the demons that escape from the Chaos Realms and as well as find the Key that can summon demons.

One day, Natsuto found a loli near his house and it turns out she’s a Holy Loli that is in a mission to eradicate the demons that escape from the Chaos Realms and as well as find the Key that can summon demons. 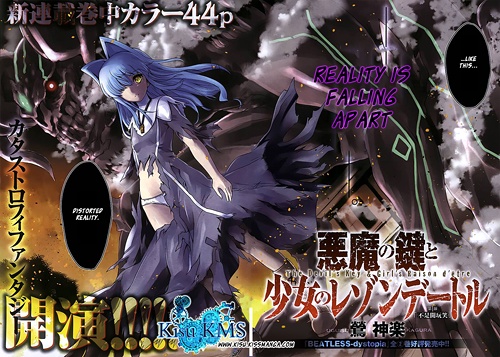 Mangapark: Akuma no Kagi to Shoujo no Raison d'être

This manga only has three chapters so I had to evaluate it on a sort of sliding scale. I think I did it justice though! Let me know what you think at the end of the review because I'd love to hear your opinions!

So as you could see from the two descriptions it is going to have Demons.... And where there are Demons there are usually two things.... Fights and Angels!!! I can say this follows that trend but I Don't think that the angel follows normal angel rules... Actually I know she doesn't!

Because of this I don't know if she is lying or if she is just odd. It could be either one since we don't get the chance to really get to know her yet. But that key business is seriously bad for the person who is born with the key!

Like deadly bad! They really need to figure things out!

On a scale of 1 to 10 with ten being a "Perfect-Must-Read" rating I give this...
.
.
.
8
.
.
.
So even though I had so few chapters to make a judgment on I decided to give it an 8 because I really got hooked! I mean if it can make me want to watch for more chapters when it has only got three out so far I would say it is going to be one of the ones that is crazy good in the end! I'm sure it will have it's points where you just really don't want to read it because it has pissed you off or something like that but if you can make it past those times then it's a hit!!

And on that note I am going to hit the road! I hope you liked the review! Did I make you want to check it out? Was there enough hints at why it was good or did it feel like there was something lacking... Please let me know so I can get better at giving you reviews you would want to read!

As always... Thanx for reading my review!
Hope you have a crazy fun day!!!