Yuuka Shinchiro is a Second Year High School student whose parents passed away several years ago in an accident.

When he's walking through a park at night, a child's head jumps into his hands and he's bitten by an alien. Soon after, he wakes up and dismisses what happened as just part of his dream, until he notices the bite mark that appeared just where it was in his "dream"!

The next morning, the news reports that a child's head was found in a park along with lots of blood. As he goes to check out the scene, he finds a violent man asking him about the "abyss". The violent man later visits his house and calls him the Grim Reaper. 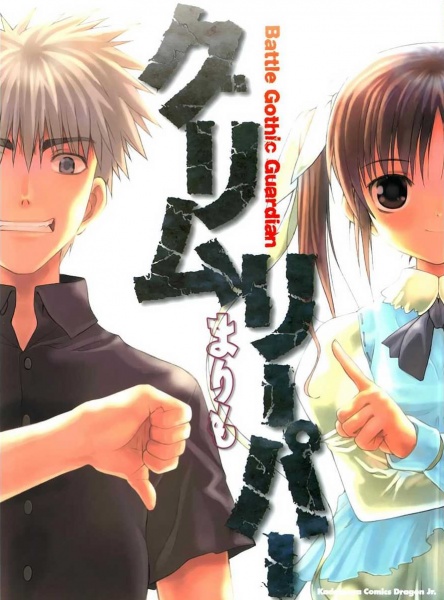 I have to admit I had a hard time finding this one... Or better yet... Finding one with the exact name I had. There are soooo many grim reaper manga out there that I literally was not sure what one I needed. After all... When I pick my list it is just names with no pictures or descriptions! After what seemed like hours of searching I found this one that was an exact match and went with it.

I really didn't know what to expect when I started it either. There are only 5 chapters written so I didn't have hopes for a good ending. Don't get me wrong... There was always the chance it would be amazing... And in truth it wasn't bad. The problem with it was one that could have been avoided and was probably avoided... I wouldn't know though since I'm using free reading sites to read it.

On both of the sites I use it only got to chapter 5 but the end of that chapter clearly shows there is more to the story. I have to say that I have never had a story just drop like this which means it probably has a second volume somewhere but it hasn't been translated or put on free sites.

So let's evaluate what I could read...

On a scale of 1 to 10 with ten being a "Perfect-Must-Read" rating I give this...
.
.
.
7
.
.
.
This is actually pretty high considering there is no way for me to tell if I'll ever get to read the rest. Let me tell you that really sucks too. I did really like it. The art was cute and well drawn but sometimes the story got confusing to follow. This could be caused during translation or it could be how it really is written so I don't hold that against it too much. The story just drops off and I haven't gone searching to see if I can find it anywhere else because it took me so long to just find the manga that fit the tittle.

I do hope someday they make or translate more of this one because I would definitely read it. Is it enough for me to search for it... Probably not since I still read so many ongoing ones I've reviewed or found for fun over the years.

With that in mind, let me end the review here. I have to start trying to find where I can watch the next tittle and be sure I'm ready for the next review!

As always... Thanx for reading my review!
Hope you have an amazing and magical day!!!