MangaRock says... Sakura and Amane are two classmates that start developing romantic feelings for one another. In school, the two hardly acknowledge each other and avoid contact unless absolutely necessary. Their relationship is shocking as no one knows that Sakura and Amane are secretly crossdressers. 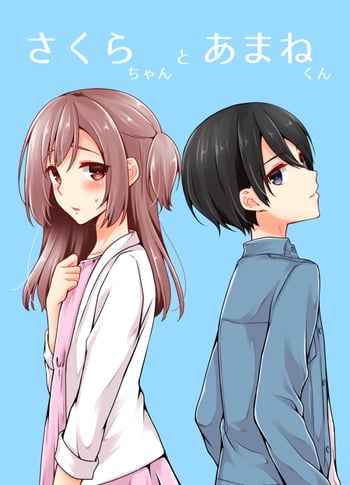 Okay... So I really wasn't sure what to expect as far as how I would feel about this one. It doesn't say much in the descriptions so all I knew was that they crossdressed and when I opened it I saw a picture of a boy and a girl... But were they in their normal clothing or were they dressed as the opposite sex?

I like this one because of that little bit of mystery but it felt like it repeated the same facts a lot. I think they just wanted to give you the point of view from each person and I like that they did... Even though there were some facts that were repeated, there where a lot of new facts added in. In total I really did like the story. It was a good blend of growing up thinking you are different and finding out who you really are. I think they were lucky to find each other!

Speaking of finding... Let's find out what rating this gem got, shall we?

On a scale of 1 to 10 with ten being a "Perfect-Must-Read" rating I give this....
.
.
8
.
.
.
Yup it got an 8... It was a great story even though it was repetitive. The art was amazing and I was able to read all the chapters available before I even realized it. That tells me it's captivating. I wish there was more chapters though. I don't know if there are chapters somewhere else but I found two sites I trust with the ones I read. I'll be keeping my eye out to see if more come out!

As for what I did read I really wish the chapters were longer... Like I said it was really a good read. If you read it you should let me know what you thought. Also if there are any other manga you think I'd like that are like this drop the name in the comments for me... I'd love to read them!

Thank you so much in advance to anyone who gives me a recommendation. I really do love when that happens because I get to see what you all like! So let's end this review here and I'll see you all on the next one!

As always... Thanx for reading my review!
Hope you have an enjoyable day!!!
Posted by Mistique Robin at 10:00 AM