The series Junjou Romantica series actually contain 3 main stories within them, which are loosely interconnected, with different couples as the main characters.

Junjou Romantica
Misaki, struggling to pass his college entrance exams, is in need of a tutor to help pump up his failing grades. Unfortunately, his only option is the cool and sexy Akihiko Usami. Usami happens to be a famous boys' love novelist, which doesn't exactly float Misaki's boat, especially since his main characters are "Akihiko" and "Takahiro," the name of Misaki's older brother and Usami's childhood friend. Understandably, Misaki is pretty disgusted by the thought of someone using his older brother as his personal fantasy-material, but then after some tender loving from Usami, Misaki is also pretty confused. He may even be developing feelings for the older man...And when Takahiro introduces them to his lovely (female) fiancée, so begins the bumpy relationship of this odd couple, filled with comedy and pure romance. (Source: BLU manga)

Junjou Egoist
Kamijou Hiroki is a broken man, consumed by unrequited love for his childhood friend, Usami Akihiko (the writer character in Junjou Romantica). Along comes Kusama Nowaki, whose name "Nowaki" means "typhoon", an orphan working his way through life since middle school. Like the typhoon he is named for, he whirls into Hiroki's life and heart, blowing all resistance away before him.

Junjou Terrorist
As fate would have it, Professor Miyagi Yoh (whom Hiroki is working with as assistant professor), and Takatsuki Shinobu, a high school student, cross paths. Miyagi, when in high school, loved (and still cannot forget) a female teacher who had a terminal illness, is now faced with Shinobu, who just says whatever is on his mind. The wheel of destiny is beginning to turn once again...

Has another short story called Junjou Minimum in vol. 4, which in turn has a separate volume of its own.

The Manga this week was really good! I didn't read my usual 5 chapters because I am still pretty sick. (Being sick take such a huge toll on me and I take forever to get better!!!)  I did make it through 4 chapters though so it's ok. I got to see the introduction of the second main story too... Junjou Egoist! I also got to see for myself that they are connected!

I have read that this manga was adapted into an Anime so I was watching the anime at the same time which is the other reason I didn't make it through the usual 5 chapters. I have to say this is one of the only adaptions I have seen that basically sticks with the story-line perfectly! Obviously there were a few things in the manga that were not expressed so well in the anime but other than that it was pretty accurate! Lets meet our couples shall we??? 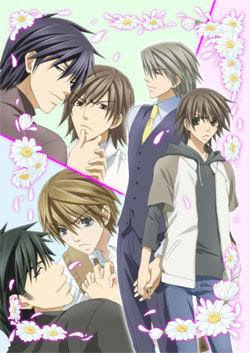 Yup that's all three of them... Let me separate them and tell you who they are..

First we shall meet Misaki and Usami... 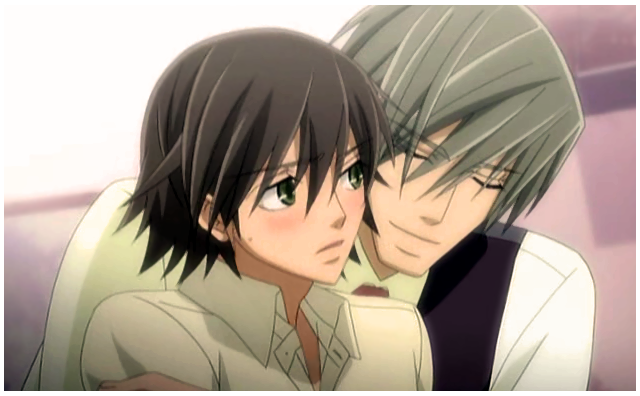 Next we shall meet Hiroki and Nowaki... 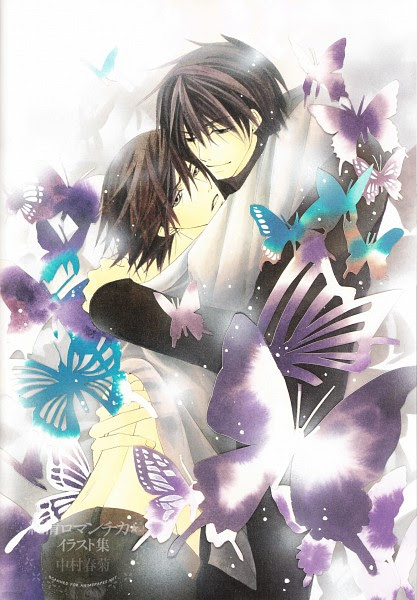 Whoa... That's a bit steamy... We'll be back in a few for introductions.. You two finish up *wink*

While we wait lets meet the last couple... Here are Shinobu and Miyagi... 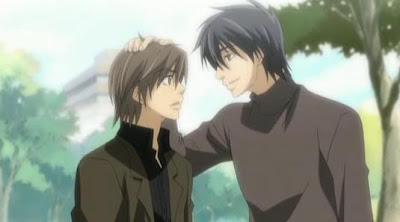 So sweet... Shinobu, sensei noticed you!!!
I'm sure you have guessed by that comment that Shinobu is the one who is shorter. Way to go Miyagi he is a cutie!!!

Now lets see if our other couple have finished turning the camera lens into a fog shop... 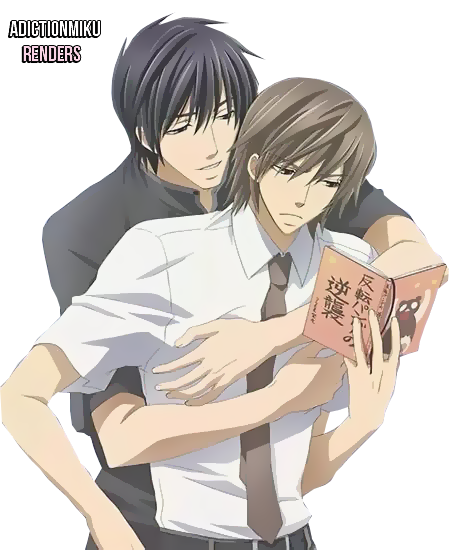 Awwww Nowaki you are too cute... but really... let Hiroki read! it might be for work after all!

Now that you have met the couples you can see how adorable they are!!! SOOOOOO... lets us move on to the next part of the review!

Time to rate it

It was well worth it but I can't give it higher since I haven't finished it... Heck I haven't even met the third couple myself! This is one I will be buying someday!!! If you want to buy them too...
Here are the links to get them...

*Season one is the Anime

Hope you Like the review... I know yaoi is not for everyone!

As always... Thanx for reading what I've written!!!

Have an amazing day!!!
Posted by Mistique Robin at 8:30 AM