There was a disease that would cause nightmares and kill people. Doctors and wizards threw in the towel, unable to find a cure. All of a sudden, mysterious magicians appeared. These magicians ate the nightmares of those who suffered from them. It was said that those who had their dreams eaten were able to sleep peacefully.

This is the story of "Baku."

Baku
Takeshi Uesugi finds out that he is the reincarnation of the "Baku," a spirit that devours people's nightmares.

Mephisto
A young man "helps" ghosts, demons, and other supernatural spirits while struggling to care for his own little family. 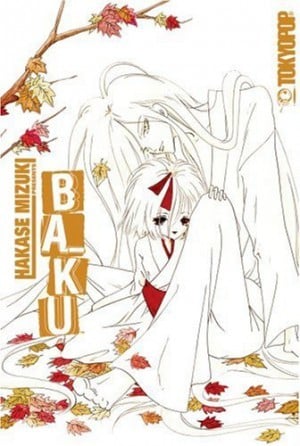 The manga this week can be found on here...

I'm starting this review a bit early... Sort of! For you I guess it should be counted as being on time right? So the reason I say it is early is because I am having issues viewing the story on this laptop... I really need to get a new one or a new computer because this is getting ridiculous!

Because of these difficulties I am going to review it as I read it... I think this time it will just be easier that way... And come on let's face it... You would love to see if and how my opinion of a Manga or an Anime changes as I watch or read it right? It's okay I get it lol!

So I have read the first chapter and because of how long it took me to load it I have to admit I really didn't even want to look at it. I load all images at once because it actually has an easier time loading them that way but even so this time it was really LONG!!! But it isn't the loading the page that takes so long... It was the scrolling from one image to the next! so maybe I have to try to load it with less images at once in the next chapter so I can see if that works better.

So that's it for the sneak peek into chapter one... Starting chapter two!

And the verdict is... Soooooo much easier if I load 10 images at a time instead of all of them.... And wow the story gets sooooo INTENSE in this chapter! There are sword fights and love scenes and OMG the feels!!! Gatta start the next chapter right now... I can't wait!!!

Wow... One family traded for another but in actuality it was a return to an original family that had been traded out??? Yeah I know that sounds soooooo confusing but it really isn't that hard to get when you read it!

OOOOO it's like a second story!!!! And this one is interesting too... Very family based... Makes me sad and happy at the same time... Next chapter!!!

So the last two chapters are part of the same story... I cried at the end. I used to have a doll that had a spirit... No joke... I have pictures of her walking across my room!!! It's crazy to think she might have been hurt when she was passed on to my Neice to keep her company. I do hope she found happiness even though it wasn't possible to keep her with me... So the last story really hit home with me... And now it is time to rate them!!!

.
.
.
10
.
.
.
I couldn't help it... The stories were great and the art was nice and I really felt for the characters so it really was an easy 10. You should really check it out though because you will never know what I'm talking about until you do!

As always... Thanx for reading my reviews!
Hope you have an amazing and fun day!