Yeah it was an odd tittle for this post I know... But I have birds on the brain! I was cleaning out my photo archives looking for a Photo for my "Photo of the Month" post on my photo-blog when I came across some pictures of a bird I once owned. I miss him sooooo much! I didn't remember taking the pictures but I remembered him! It was nice to run into them. He was still a baby at the time so he was tiny... Well... Tiny for a Blue and Gold Macaw that is. Here take a look! 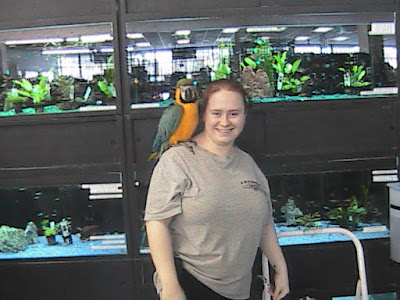 We were at the pet store he was bought from here. I had bought him before his feathers even came in and I went to see him every day till he could come home. I even found a video of his first bath... But I'm not sharing that one with you.

Seeing these and other pictures of birds I've had living in my house really makes me miss having a bird.... Now for those of you who know Macaw you are probably saying to yourself something like "He would live longer than me so why do I not have him anymore" right?

Well the truth is... I didn't want to give him away... and at first I didn't. When I got pregnant with my first daughter Vanyel did ok with her... He didn't like to share me though so he got very loud... We dealt with that by moving his cage away from bedrooms and that worked well.... Then I got pregnant again.... My youngest was born and Vanyel was no happy at all! I was his after all.... At least that was the feeling he gave off to everyone else.

Anyhow... When my youngest was about 3 months old... Vanyel attacked her. I was so scared for my daughter but also for Vanyel. How was I going to make the family work if he couldn't get along with my children... I didn't know what to do so I asked a Vet tech. friend of mine if she had any advice. After all she had 8 birds and three kids so I figured she would have some ideas.

Unfortunately she never had that problem but she had another Vet Tech. friend she would ask because they had another type of Macaw. I thought that it would be amazing if she had advice for me. But again she didn't have any help for me.... We tried for a few more months to get everyone OK but it got to the point where the kids weren't allowed in the same room as the birds... Which made it so I wasn't with him for most of the day... And for a social bird like a Macaw that wasn't a good thing.

I felt so bad... I fried to my friend and she decided to tell me that the friend she had talked to was looking for another Macaw but she didn't want to get it from a pet store.... She said she would ask if her friend wanted to take on my Vanyel so I could be sure he had a great home.

She ended up adopting him from me and I still get updates sometimes on how he is doing.. He is so much happier where he is now so I don't regret giving him up but I still wish I hadn't needed to.

I won't get another bird but I do miss my dear Vanyel.

So yeah... I have birds on the brain and have been often called a bird brain... I'm OK with that!

As always... Thanx for reading my post!
Have a bird brain fun and fantastic day!
Posted by Mistique Robin at 10:00 AM