The story is set in Aquafall, a fantasy world abound with water and greenery, and populated by dragons and fairies. Meteorites suddenly bring forth evil creatures that threaten all living things on the planet. The fairy Syrup assembles the Aquafall Defense Force, with three girls of the dragon clans as recruits. The story follows Syrup and the dragon girls Leviathan, Bahamut, and Jörmungandr as they work together to battle enemies and grow up. 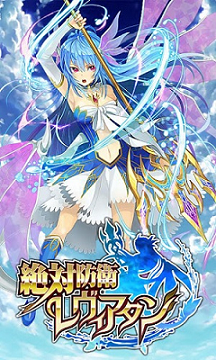 So this is a really nice anime in my opinion... Though at first... In the first three sentences I thought it was going to be an idiots dream come true for an anime because the way things were worded was very odd to my ears.... And I have heard my share of weird things!

But by the end of the first episode I realized something... If you have ever watched the anime "that time I was reincarnated as a slime" you will understand... The stupidity of this anime was oddly satisfying to watch... It was less stupid and more fitting.

As time went by and I watched a few more episodes, Surprisingly, I was completely enjoying watching it too!

I think i really like that it has a kind of old fashioned anime feel to it with the more modern animation styles... That's not an easy thing to manage to be honest... They handled it so well that I felt like a teen watching an amazing anime for the first time in a long time! I felt like I really traveled back to my youth! It was amazing... The story is a good one too!

Nice art... great story.. Good character development too... All around it was great to watch! You just have to get past what seems like stupidity in the beginning... But if you do it is so worth it!

Speaking of it being worth it... This is the rating it earned!

On a scale of 1 to 10 with ten being a "Perfect-Must-Watch" rating I give this...
.
.
.
8
.
.
.
I know it will probably raise up in rank before I finish it but as of episode 5 this is what it got... Not to shabby right? I didn't give it a higher one because it seemed so stupid at first but like I said before... Each episode has a chance to redeem it a bit. It's not set in stone how it will go with the points... Any episode could be the turning point... For good or bad... This one was for good!

I can't wait to finish watching it!!!

For now, however, I must say good-bye!

As always... Thanx for reading my review!
Hope you have a Mysteriously fun and Magical day!!!