Yukito Kunisaki is on a journey in search of the Winged Maiden who was bound to the sky centuries ago, after hearing an old childhood tale from his mother. As Yukito shows his puppet show to people in an attempt to make some money, he finds himself in a small town in which he did not expect to stay very long. However, when he meets an unusual girl named Misuzu, things take a drastic turn as he is invited to stay with her.

By staying in the quaint town, Yukito soon becomes friends with the locals. As he gets to know them better, he learns of their problems and decides to help, putting his search for the Winged Maiden on hold. With his search on hold, and his growing attachment to Misuzu and the small town, will Yukito ever find the Winged Maiden, or is she closer than he thought?

FUNimation had this on their site and that is where I chose to watch it. I was a little disappointed that there were only 12 of the 13 episodes available there. It did run well though so I guess that makes up for it... Here is what FUNimation has to say about the story...

Yukito is a travelling performer. He moves through this world with only the clothes on his back, driven onward by the stories of “The Girl in the Sky”. Not knowing when or if he will find her, Yukito wanders, clinging to fleeting hope.

Destitute and near starvation, Yukito's life changes after the eccentric Misuzu offers him food and shelter. This fragile beauty shares his dreams of a life lived amongst the clouds, and Yukito listens closely out of a gratitude which quickly gives way to curiosity.

The unlikely pair grows close, but Yukito cannot escape his destiny, or his past. His need to find "her" is much too strong. Who is the girl in the sky? Does she even exist? The answers twist in the breeze, and the questions float aimlessly through the air.


They give us a little more information than MyAnimeList does but still leave a bit of mystery! Now to watch!!!
.
.
.
.
.
Yukito is a HUGE mystery throughout most of the show... 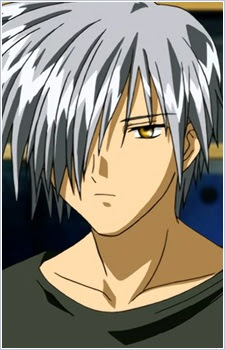 
We learn bits and pieces of his past as we go along... He has quite the family history!!! And his present is a little odd too... He seems to have a habit of making friends with some interesting girls..

From left to right... Potato (the dog), Kano, Minagi, and Misuzu


These are some of the girls he meets... Though not all of them... He helps two of them out with problems they are having and becomes good friends with one of them while the other seems to fade out of the story... However his friendship with Misuzu is what the story mostly revolves around... Misuzu has a much bigger problem than we could have ever guessed in the beginning... This is because she comes off as just a carefree klutz but there is much more to her than meets the eye.


You will have to watch it to find out what though!!! The two of them have some interesting adventures and by the end I was in tears! There is a really HUGE emotional twist to this show! But...I'm not telling you what it is... Trust me though it's a good one!!!

On a scale of 1 to 10 with ten being a "perfect-must see" rating I give this...
.
.
.
9
.
.
.
The facts are that I just could not stop gettin all emotional when I finished this Anime... So if you are looking for an Anime that will hit you right in the "Feels" then this is perfect! The story was so well thought out and the way they blended the episodes was perfect. The reason it's not a 10 is because there was a "cliffhanger" and they never made another episode.

To be fair the cliffhanger might have just been showing you something about the story and they hadn't intended for it to be an actual cliffhanger... News flash to the creators... IT SO WAS A CLIFFHANGER!!!