Kiss Him, Not Me!

Kae Serinuma is a second year high schooler and an avid fujoshi who secretly ships her classmates, Igarashi-kun and Nanashima-kun. The death of her favorite anime character causes her to become stressed—and loses weight rapidly. Now that Serinuma has become an attractive girl to her classmates, her snarky kouhai Shinomiya-kun, and her senpai Mutsumi, how is she going to deal with them...with her constant BL-filled, fujoshi mind?!


This manga was actually really really cute! As far as I can tell it is an ongoing one so when I rate it I will be using the "Promising" tag again. Shall we start??? This young girl we see here holding her head is Kae... After her weight loss that is. The 4 boys behind her are people who fell for her after she lost weight... the top two are her classmates Igarashi-kun and Nanashima-kun who she is secretly shipping... The darker haired one on the bottom is her senpai Mutsumi and the lighter haired one is Shinomiya-kun.

I read all the chapters I could find on Crunchyroll already because the story was filled with unexpected lines from Kae that I really think made her character work. Lets let the Manga page tell you what a Fujoshi is since that is what Kae is... 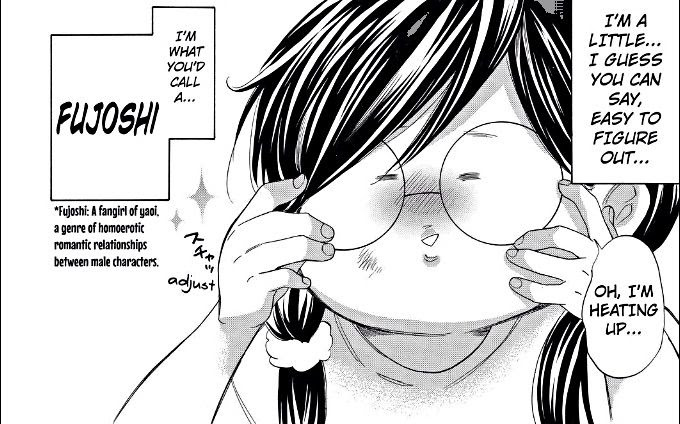 I think it was kind of a bad move to start her off fat though. It made it seem like it was because she was fat that she felt that way... But then it might have been intentional because that was her character development line. Her opinion doesn't change much after the weight loss at first.... And truthfully it only changes a little when it does change.

Oh we have to add in that she also ends up with a female who falls for her... But to find out about her you need to read the Manga.

On a scale of 1 to 10 with ten being a "perfect-must-read" rating I give this...
.
.
.
Promising 9
.
.
.
There is humor and emotion in this Manga!!! I said before it was on Crunchyroll but you have to be a member to read all the chapters there. I'll link you to it just in case you want to check it out...

Crunchyroll: Kiss Him, Not Me!

But you can also read it on MangaPark... HERE!!!
They also published it in English... Here it is on Amazon...

Amazon: Kiss Him, Not Me!

This is another one I will be buying to support the Mangaka! I hope there are lots more volumes to come because there are soooo many places the story could go!

Hope you enjoyed the little peek into this Manga as much as I am enjoying reading it!!!
That's all for now!