Diabolik Lovers More Blood
.
Anime
.
Synopsis
.
Yui Komori used to see dead people. But as troubling as past glimpses of spirits, poltergeists, and psychic phenomena may have been, they pale into insignificance compared to what she's about to discover once she's forced to transfer to a new school. Because it turns out that her own history is very different from what she thought it was, and she has a very different kind of family waiting for her.

Now she'll be sharing her living space with six very attractive young men, though not a single one is human. And while her new dorm mates may be brothers, and their attraction to her involves her bloodline, "brotherly" is the last word to describe their intentions. In moving from her father's church to becoming the object of six blood lusting young vampires' affections, Yui will undergo the most shocking, soul ripping and draining experience any teenage girl could imagine in her wildest fantasies... or most salacious nightmares.

This is the first season's synopsis... Here is the second seasons now...

Yui Komori may (or may not) have attained vampire status, but due to her inexplicable links to the Sakamaki clan her life remains somewhat unchanged. Yet troubled by new dreams and apparitions mentioning a mysterious "Eve," Yui's life is suddenly once again – quite literally – turned upside down when she and the Sakamaki brothers are involved in a fiery car crash. The incident heralds the appearance of four new vampires, the Mukami tribe, and to her dismay these dashing young men have their eyes and fangs set on Yui as well!

The Anime this week was one that I was really curious about... I wanted to know if they would do things like the Manga or not. I reviewed the manga a while ago...
Here is a link to the post if you missed it...

The first season elaborates greatly from what I can tell... Like the fact I was able to learn the boys name other than their last name! Also I feel like even though they bounce around like the manga did, they somehow manage to connect everything together better.

In season one Yui becomes the plaything of these 6 very sexy looking vampires... 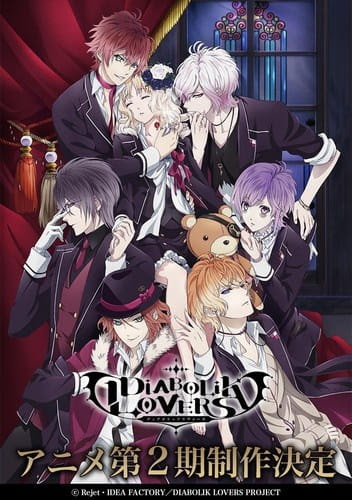 Yes I used the Anime title picture... She doesn't completely hate it there either... If she did... she wouldn't have done what she did in the last episode that probably saved all their lives....

You have to watch it to find out what exactly she did!

Anyhow after she saves them all so dramatically she get to meet these young vamps in season two.. 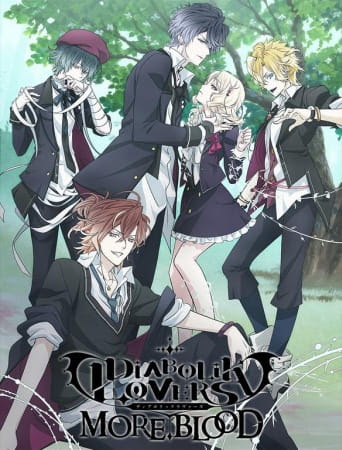 Needless to say... For a while she is their play thing for some big plan....Though she is quickly stolen back by her first playmates! However does she stay with team one or team two... You have to watch to understand!


Now to rate it

On a scale of 1 to 10 with ten being a "perfect-must-read" rating I give this...
.
.
.
9
.
.
.
Season two leaves us with a few surprises and makes us want season three already! I don't like that it skips around and seems like the episodes barely connect so I can't give it a 10... But it is one that I would watch many times over.. I like it that much!

Well I guess we will leave this here... When the season three comes out I will probably do a review on that too... I'll call it an Update Review or something... But that's a later story!

As always... Thanx for taking the time to read this!

Have a wonderful day!!!
Posted by Mistique Robin at 8:30 AM