For the sake of parents' business plans, Hidaka Sana moved to Tokyo. Five years later, he has become a high school student, and returned to his hometown, Sakuranomori. He feels uneasy because the streets of his hometown and his old friend he meets again have changed a lot since five years ago. The most changed thing is his childhood friend, Yatsushiro Nanaka. She used to smile sweetly with innocent eyes, but now she has withdrawn herself and is gloomy. (Source: AnimeNfo)

This anime can be found on AnimeSeasons.com which I will provide a direct link to in a few minutes. First here is what they had to say about the Anime...

Hikada Sana returns to his hometown after 5 years away living in Tokyo. Although there are some changes to the town, most has remained the same. On a detour to his apartments, he notices a girl in a shrine maiden outfit watching him when he visits the shrine. He finds out, the next day at school, that this girl is actually Yatsushiro Nanaka , his old childhood friend whom he gave a bracelet to before he left, that she still wears, even to this day.

And here is the link I promised you... AnimeSeasons.com: Myself ; Yourself.

I should probably start with telling you there are 13 episodes in the series. They are not too long, but not too short either... So it's a good length that doesn't leave you upset at the end of each episode and doesn't give the feeling it ended too soon.
Now let me show ya'll the most important people in the Anime... I'm not going to go into detail about the characters but I will tell you who they are from left to right...

Now... Everyone other than Yuzuki, Hinako, and Asami grew up together.... Here is a picture of them as kids too.... 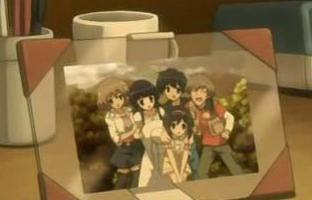 Upon Sana's return we start learning about their past and about what happened while they were away from each other... We also get to know about them as they are right now. During this discovery process we meet the three new people who join the 5 original friends. The group goes through a lot and in the end there is an unexpected split up! Watch to find out what happens because telling you would spoil it!!!

Now the hard part... Time to rate it!!!
.
.
.
.
On a scale of 1 to 10 with ten being a "Perfect-Must-See" rating I give this...
.
.
.
.
6
.
.
This Anime was one I could have shut off and not picked back up but also one I could watch for a long time and not get bored. Basically it was catchy enough I would recommend it but not one I would really say was truly a must see. All in all it was a good Anime though.

Well that's it for this Spotlight Review!

As always... Thanx for taking the time to read my review!!!